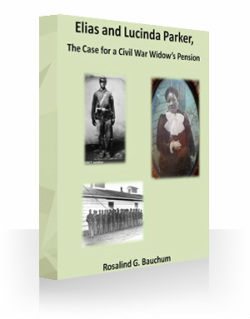 Parker, a stonemason, artisan, and minister grew up in slavery and later served in the 38th United States Colored Infantry, Company I. The story of his life was passed down by my family through generations of personal story-telling, an art form brought to the United States by African slaves.  These stories of Elias VanBuren Parker and his wife Lucinda Johnson Parker were frequently shared by his daughters Harriet Ann, Mary and Luvenia and his sons Elias Jr., and Thomas. All of the children were born in the eastern Pennsylvania borough of Mount Holly Springs, a settlement of former slaves from Virginia.

Much of the unique story of Elias VanBuren Parker sat in the National Archives in Washington DC for over one century. I read through applications for a Civil War pension submitted by Elias in 1890 and a subsequent application from Lucinda in 1891. The content of these files allowed me to learn about their lives. While growing up away from the state of Pennsylvania, my brother and sisters and I had many questions about our ancestors. Prior to the time I discovered the pension papers, we had no idea of the names of our great –great grandparents. Thus, the pension files uncovered a wealth of information regarding the Parker, Johnson, and Bowman ancestors. Because of slavery and the separation of husbands from wives, children from parents and siblings from each other, I felt it was important to compile a document of facts revealed from the pension applications.

This book is a living history for the descendants of Elias and Lucinda Parker.  My desire for this book is that the facts revealed will become a valuable source of information for the Parker and Johnson descendants.