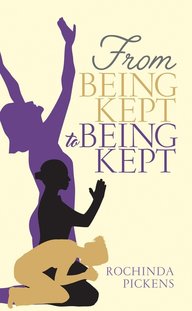 ​When Rochinda Pickens surrendered, God released her totally from the misconception of what a KEPT WOMAN looks and acts like. While searching for a relationship with her absentee father she reached for substitutes only filling a void that led a winding road of false beliefs. As she experiences what she thought was the life she desired and deserved; suddenly, a shift happens. What most people thought would shatter and destroy her; completely saved her life. Then, there was a sudden change in the way she walked and the way she talked. The feeling of once being a captive was relinquished to a new found freedom From Being Kept to Being Kept provides the truth about how God continues to keep us through it all. Rochinda's message is very clear about the God who has kept all of us.

Rochinda Pickens is a wife, author, speaker, grandma and mother of three. Born and raised in Kansas City, Missouri, she is the Chief Executive Officer and Founder of Kept Woman of God Ministry and Kept Woman of God Inspirational House. She is an avid philanthropist and helper to those in need. She is a member of Sister Circle of Greater Kansas City. Rochinda is a member of St. James United Methodist Church & Renaissance Campus. She also served as board member for the Missouri Conference for United Methodist Churches. She travels the world speaking and connecting with all and sharing her message of being a Kept Woman of God.