The Story of Gumby; Tracing the Family History to the 1700's
by Rosalind Gumby Bauchum 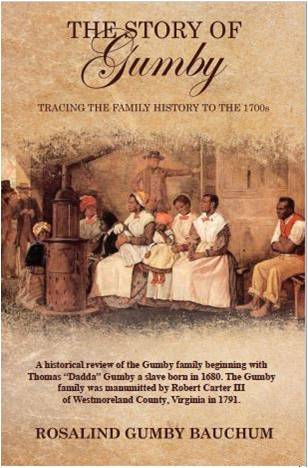 ​“Robert Carter didn’t believe in enslaving others.  After personal study and self-seeking, he began the process of setting his slaves free in 1791; seventy-four years prior to the Emancipation of Proclamation.”

Five hundred and nine Virginia slaves of Robert Carter III were manumitted from slavery beginning in 1791 through a Deed of Gift.  Among the slaves were several members of the Thomas (Dadda) Gumby family.  Tom, first a slave of Robert “King” Carter, was the patriarch of many of the slaves living at Nomini Hall in Westmoreland County, Virginia. The book’s introduction begins with the origin of the name of “Gumby,” showing a probable linkage withs West Africa. An array of historical records identifies Gumby individuals in colonial Virginia, residing in Westmoreland, Frederick, Warren and other Counties, to the family’s migration to Cumberland County, Pennsylvania.