The Zealots
by Reginald Wattree, Jr. 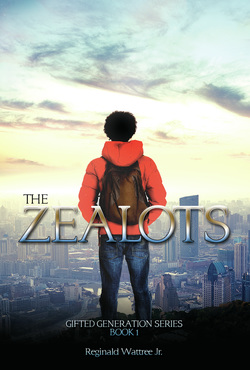 The fifteen year old John Mann is faced with a decision to believe in what he has been taught his whole life about religion or go another way. His decision to answer God’s call, proves to be very costly and possibly fatal.

In a nation that is shifting and opposition against Christianity on the rise, anyone who claims to be a believer is labeled as a “Zealot” and in danger of breaking new hate crime laws. Will John question his decision to take the path of Christianity? Since his conversion things have only gotten worse for him. His closest friends have abandoned him and he is endanger of losing his childhood friend and girlfriend because of his decision.

However, John is not alone in his pursuit of God he has support from a group of six other teens who God has gifted with supernatural abilities. Each one has been given a unique gift to tap into the spirit world and fight against forces that are to come. John starts to discover his unique ability. One day he has a dream. A dream that turns out to be a nightmare. In his dream he is warned of a tragic event that is about to take place in his high school. The question becomes can John stop what is about to happen in his school? Can he find out who the perpetrator is to this horrific crime or will John and his group be too late?


Reginald Wattree Jr.  is a Kansas City native who now resides in Lee’s Summit Missouri. He is a devoted husband and father of three. A graduate of DeVry University, currently works in the field of Information Technology.
Despite his training in Management and Information Technology, Reginald likes to make up his own stories complete with real life, real drama and cliffhangers. In his debut novel, The Zealot’s, He keeps the readers engaged on every page. With this introduction to the Christian Fiction genre, his Gifted Generation Series is sure to gain the attention of audiences of all ages. Reggie is securing his place among the list of Best Sellers.